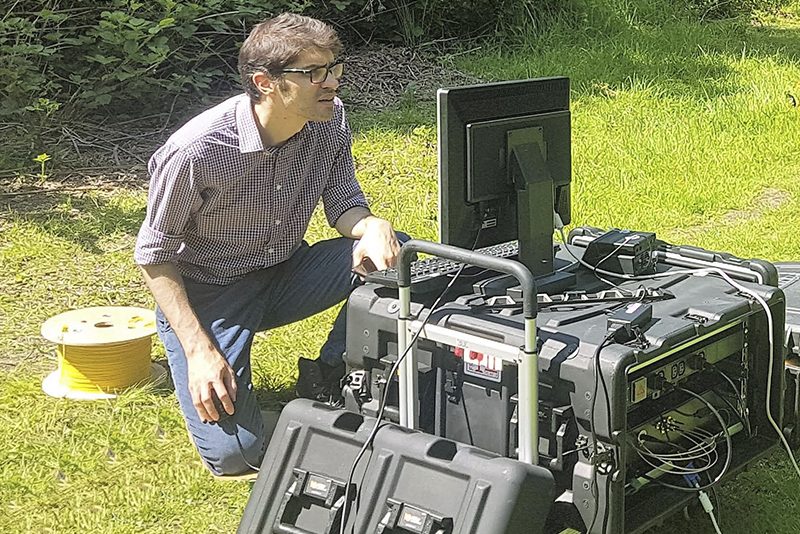 In 2010, Dr Ali Masoudi embarked on his PhD at the University of Southampton and devised a distributed acoustic sensor (DAS), which can measure vibration in real-time along a fibre optic cable. The data can then be analysed to recognise unique events in that environment. More than a decade later, Ali, is now a Senior Research Fellow and is working with international organisations, using the DAS to improve the way railways are monitored and how subsea cables can be protected. Ali shares his insight about his research and how it could have far reaching applications around the world.

How did the DAS develop and what can it do?

The background of distributed optical fibre sensors (DOFS) started 30 to 40 years ago with distributed temperature sensors (DTS). These sensors were able to monitor temperatures along the length of a fibre optic cable. We then started to use Brillouin scattering techniques to measure both temperature and strain. But both of these techniques were weak and could only measure static or quasi-static events. Over the past 10 to 15 years and with advances in high-speed electronics, Rayleigh scattering based distributed systems were developed for vibration measurement.

The DAS uses Rayleigh scattering to find vibrations in the fibre’s surrounding environment in real time. Having the information in real time allows organisations to, for instance, monitor traffic across rail network or react quickly to pipeline leak. The data can then be post-processed to establish what has happened in that environment with more details. Over the years, we’ve been able to extend the range that we can measure vibration and our most recent study shows that this system can work over 152 km.

How is this being translated into real world applications?

There are a number of applications for this technology and we have been working with different industries to field test it. For example, subsea power cables, which connect offshore wind farms to the mainland, are occasionally damaged by shipping vessels and their anchors which catch the cable. The first challenge is that it’s very difficult to realise where the cable is damaged and the second is the repair. It’s a big problem for this industry, so they were looking for a solution. In the lab, we put a section of the subsea cable in a hydraulic machine and using the optical fibres in the cable, we could test for variation in the strain along the fibre, as it was pushed and pulled in the machine. We also dropped a weight on the cable and you could see the vibration from the impact on the cable. This information can be used to show the defects in the cables.

We are also working with the railway networks to improve how they monitor disturbances on the track. Currently the telecoms fibre which runs alongside the track can be used to monitor the trains and any activities around the track. The railway companies will be able to track the quality of the railways and detect defects much quicker than before. They can use this data with machine learning to track lots of other activities like when a tree falls on the line – this will be a big step forward.

But there are so many other applications, which could benefit from this technology. It could be used for pipeline monitoring and alert when there is a leak, or traffic monitoring on motorways. There are optical fibres running parallel to the roads, so we can use them to track cars and the traffic. A big area of expansion for this technology is perimeter security. High-security locations will have optical fibres near them and they can be used to monitor people walking close by.

What new research collaborations are you working on?

Most recently, we’ve been working with colleagues at the National Oceanography Centre to test the potential of the DAS at subsea level, to find the location of an optical fibre and assess aspects of the acoustics within the water. We’ve tested the technology in the University’s AB Wood water tank but also in Southampton Docks. We used a sound source called Boomer on the surface of the water and the DAS monitored how the sound propagates, the speed it reaches the fibre and how it gets reflected back. This is a really exciting area as it has lots of application in ship tracking, earthquake monitoring and investigation of thermal vents on the seafloor.

We also have a collaboration with researchers in Japan and we are sending the DAS out there, so they can connect it to their fibre at the seabed and use it for earthquake monitoring and basic measuring of geophysical activities. We are also working with researchers in the Philippines on traffic monitoring. When travel restrictions lift, I hope to go out to Japan and to help operate the system.

How does the Hub support your research?

I’ve really benefited from the Hub helping to establish relationships and collaborations with industry. We’ve been able to use feedback from companies to improve the sensors, so it does what the companies need. We are lucky to be able to use the Hub’s expertise to test our system.

What has the industry’s reaction been to the DAS?

It’s been very positive, and it’s been getting a lot of attention. We took it to the Advanced Engineering Exhibition a few years ago, and it was very well received but that was an earlier version of the DAS. We’ve now improved it, so it can capture data in real time and that is the system we are using in our collaborations now.

You’ve been working on this for such a long time – where do you see it going over the next few years?

It’s been a massive piece of work and one that I am very proud of. There’s so much potential in this area. The systems have a limited spatial resolution – it’s about one metre. But if you have activities which take place over 5 cm, you cannot detect that because it is much smaller. So, we’re working on a system which has a 5cm special resolution and that could open up lots of other applications in civil engineering and healthcare. We’re also trying to extend the range of systems – 152 km is the furthest – so we’re trying to extend it to 200 km. There is still a huge amount of work to be done.